The CERN – Large Hadron Collider (LHC) has been distorting and collapsing Earth’s magnetic fields.  The LHC is so powerful it even affects the Sun.  The unproven science of such high energies has been deemed to require “legal sovereignty” for the possible holographic reality effects upon not just Earth itself but all “reality.”

The CERN Large Hadron Collider recently upped the Energy Beam weapon to  1184 Tera-electron Volts.  It was originally specified and sold to the world for “only” 14 Tera-electron volts for ~$4.75 Billion Federal Reserve Notes.  Such high energies are unheard of and are a source of CERN-LHC Energy Coverups.

Their scientists seems are moving in the direction of high energy physics out of the realm of material space-time xyz-t with “equations” and into the realm of ElectroMagnetic Resonance Energy Informatics as “particles” operators and programs.  These program-like informational units then interact with “reality” (Higgs-Boson) to produce space, location, speed, mass, etc.  Such advances in quantum mechanics and string theory into informatics in a seemingly hush hush topic.  The “transition into a holographic reality as maybe too ‘shocking’? for some consciounesses” was the theory for not sharing the concepts more widely.

The CERN Large Hadron Collider is the 5th Sovereign City-State besides The Vatican Inc, The City of London Inc, and The District of Columbia Municipal Corporation.

In early 2006, the CERN Control Centre (CCC) was built on the French side and reigns sovereign over all operations.

Sovereignty would be needed to conduct such “experiments” on Earth that might actually do such damage and change the Earths Shields…  with potentially catastrophic results.

Some theorize that the CERN-LHC changed the weight of a single electron and thus shifted reality into a parallel dimension -right next to the other one- where the Mandela Effect is now a part of History.

The Corporate Governance of CERN LHC is as such: 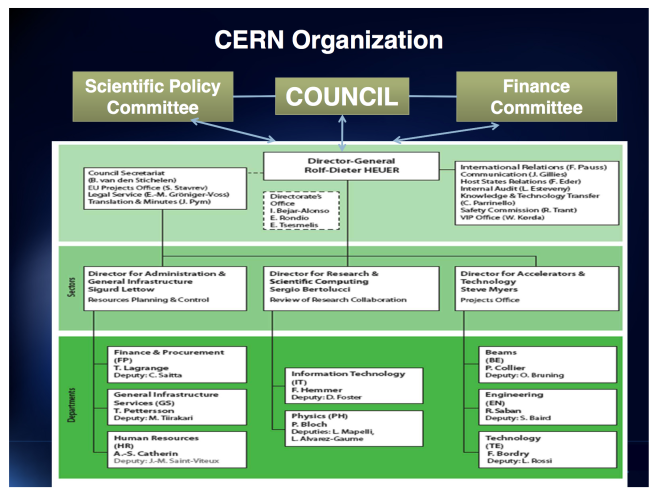 The COUNCIL is headed by the DIRECTOR GENERAL, a Military Post.  From CERN’s “COMMON SENSE CODIFIED”:

The Director-General [former Rolf Heuer] announced it in his speech at the beginning of the year, and the Bulletin wrote about it immediately afterwards. “It” is the new Code of Conduct, the document that lists our Organization’s values and describes the basic standards of behaviour that we should both adopt and expect from others. “The Code of Conduct is not going to establish new rights or new obligations,” explains Anne-Sylvie Catherin, Head of the Human Resources Department (HR). But what it will do is provide a framework for our existing rights and obligations.”

They are all about the RIGHT TO DEBT-SPEECH and creating debt negotiable instrument obligations.  CERN-LHC Financial Committee created $13.25 billion in debt, which the gave to themselves and started doing Earth altering scientific experiments and creating holes into other dimensions.

The third driving authority is the Scientific Policy Committee who controls the scientific policy and direction of the debt toward “legalized scientific-like” endeavors, no matter their “sovereign” threat to humanity, the planet, and the ecosystems -local habitats and space weather.

CERN has their own top level internet domain which is only available by international diplomacy for such corporation insurance franchises posing as science.

While looking for an actual copy of the COMMON SENSE CODES operating the CERN-LHC, here are FAQs for the statutory LHC Codes.  Most fascinating are General, Vehicles, External Activity, Internal Dispute, Private Legal Obligations, Privileges and Immunities, and Personal opinions.

Contractors are expected to comply with the relevant parts of the Code of Conduct as a condition to their performing their activities on the CERN site.

You should read the Code of Conduct carefully… It is designed to help you understand both your rights and your obligations.

No. CERN vehicles are provided to members of the personnel within the framework of their work for CERN and solely for official use.  Moreover, CERN car insurance [they issue!] will cover only professional use.

Yes, provided that you participate without your connection with CERN being identifiable.

Working in a restaurant is a professional activity, even if it is carried out outside normal working hours.  If you are an employed member of personnel, you must obtain the prior authorization of the Director-General before accepting the position.

No, it is not appropriate to involve your national delegation.  Disputes you have with CERN should be resolved via the internal dispute settlement procedures.  First, it is worth attempting to resolve the matter amicably. You may wish to discuss it with your hierarchy, your Department Head, the Human Resources Department or the Staff Association.    If the matter cannot be resolved amicably, you may challenge the decision within CERN, either through the review procedure or directly through the internal appeal procedure (S VI 1.039). Thereafter, once internal remedies have been exhausted, you may wish to file a complaint with the Administrative Tribunal of the International Labour Organization (ILOAT).

The Director-General may authorize members of personnel to stand for election at the local level. You should address a written request to the Director-General who will inform you if you may accept the offer and, if so, under what conditions.

Private matters remain private insofar as they do not reflect negatively upon the reputation of CERN.  However, there are times when private matters reflect poorly on a CERN contributor and, by extension, on CERN itself.  CERN contributors are therefore expected to ensure that they comply with applicable laws with respect to the discharge of their civil obligations, and, in particular, paying bills, ordered sums of alimony and child support.  [ED: ALL ABOUT DEBT.]

You should refrain from taking advantage of your status in order [ED: term of debt issuance] to obtain benefits for which you would not qualify if your income as a CERN staff member were taken into account.  Such benefits, normally reserved for low-income categories of the population, include interest-free mortgages, low-rent public sector housing and the lowest charges for education or supervision of children.  [ED: All Debt Related activities/accounts]

You can express your views when contributing to CERN policymaking, but once policies have been adopted you should refrain from publically expressing views that undermine the policy.

To summarize the above legalese, Each CERN “member” is a CERN CITIZEN singularly party to the CERN CODE OF CONDUCT operated by the DIRECTOR GENERAL.

At its 173rd Closed Session today, CERN Council selected the Italian physicist, Dr Fabiola Gianotti, as the Organization’s next Director-General

CERN CITIZENS [artificial person insurance franchises] are given all kinds of DEBT “benefits” and are thus obligated to the right of debt-speech of and by CERN-LHC Governance.  CERN-LHC “citizens” specifically may not claim to be Foreigners of their home country.  CERN-LHC “citizens” get their own vehicles with CERN Insurance and even get “CD” license plates.

Vehicle “CD” Licenses Plates represent the authority of the Corps Diplomatique.  The Diplomatic Corps “is the collective body of foreign diplomats accredited to a particular country or body.”  CERN-LHC City-State only issues CD license plates.  The Corps Diplomatique is headed by the Marshal of the Diplomatic Corps who sits in the Royal Households of the United Kingdom.  The authority for diplomatic Immunity comes directly then from the Monarch of the United Kingdom with the legalese of the UN, the violence of DC, the debt of City of London, with the blessing of the Vatican Inc.  The Vatican was granted City-State-hood for the Vatican’s Support of Hitler’s Nazi Germany and Mussolini Fascist Italy

The actual Code of Conduct for CERN-LHC is copyrighted private text and owned by WASHINGTON, DC MUNICIPAL CORPORATION and the I.M.F.  These are UNITED NATIONS vendors of Governmental Services as Corporations.  It must be purchased by outsiders.  Information is found about it, seen below.

Given that the IMF owns the copyrighted LEGAL CODES that operate CERN-LHC as a separate CITY-STATE -unto itself-, it is absolutely clear that the supposed science is really about DEBT and the creation of more DEBT INSTRUMENTS in the name of science.  The UN-DC-IMF does a lot of other ugly debt-ponzi things too; the CERN-LHC is not the first.  See this TED Talk by John Perkins on Confessions of an Economic Hitman.

The UNITED NATIONS, INC is the Fourth Nation State -above and surrounding other APOSTILLE-based Governmental Services Corporations authorized by the Vatican Inc.  It oversees the International space between all Governmental Corporations and thus surrounds them.  Any given country must SURRENDER to the UN to be a member.

Where the Vatican Inc controls the Spiritual and “all Earth Property,” The City of London Corporation Controls the Babylonian pledged slavery Debt Monetary Systems, and the District of Columbia Municipal Corporation controlled the Global Military Power (thou not any more), The United Nations Inc controls the legal codes and international conventions corporation abide by, and the CERN Large Hadron Collider controls the Science.

There are only TWO countries in the world that have SQUARE flags.  The Vatican Inc is one, which shows the significance and importance of a square design.  The other square flag “country” is Switzerland, home for the Knights of Malta, The Secret Society of Secret Societies with their Red/White Cross. 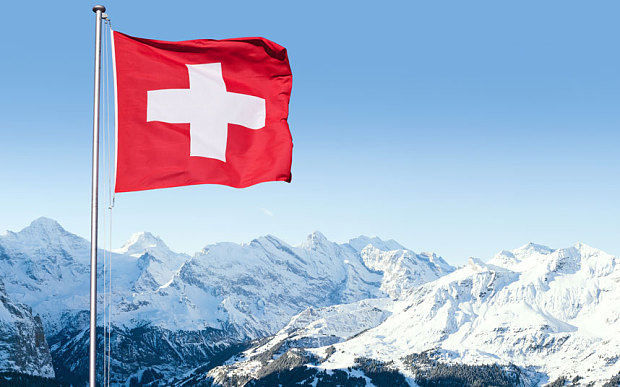 The Vatican and the Knights of Malta are not really the best of friends, but it may just be show.

The Vatican-Israel combo gets mixed with Switzerland as it was the first “Jewish State” before Israel.  The Republic and Canton of Geneva uses the the IHS Jesuit Sun Logo  (aka Pope Francis) Symbols.  The Latin letter of Sigma (∑) replaces the S.

Which is also found on the CERN LHC Headquarters, and on the Pope Francis’ Seal.  The Jesuit logo is found in a great many places.

The N.S.A.-like international spy organization is called “The Federal Intelligence Service” (“Nachrichtendienst Des Bundes” in German) and is the most known unknown of government secret covert spy organizations.  Of course, all spies need a place to call home: it’s Switzerland.  This is also where the BANK FOR INTERNATIONAL SETTLEMENTS also has its home…  The B.I.S.  is the International Central Bank of “Nation” Central Banks!  I suspect the movie, “The Kingsman: The Secret Service” is about outing the most notorious spy “agency” FIS/NDS

To wit: There appears to be some very interesting possible links between 9/11 and Switzerland’s F.I.S/N.D.S. (similar to the US’s CIA/NSA- only far more secretive).  The FIS/NDS is the Global Secret Agent Organization of Secret agent organizations.  They have known links to US Corporate Secret Agencies as well and appear to work together, despite theatrical threats otherwise.